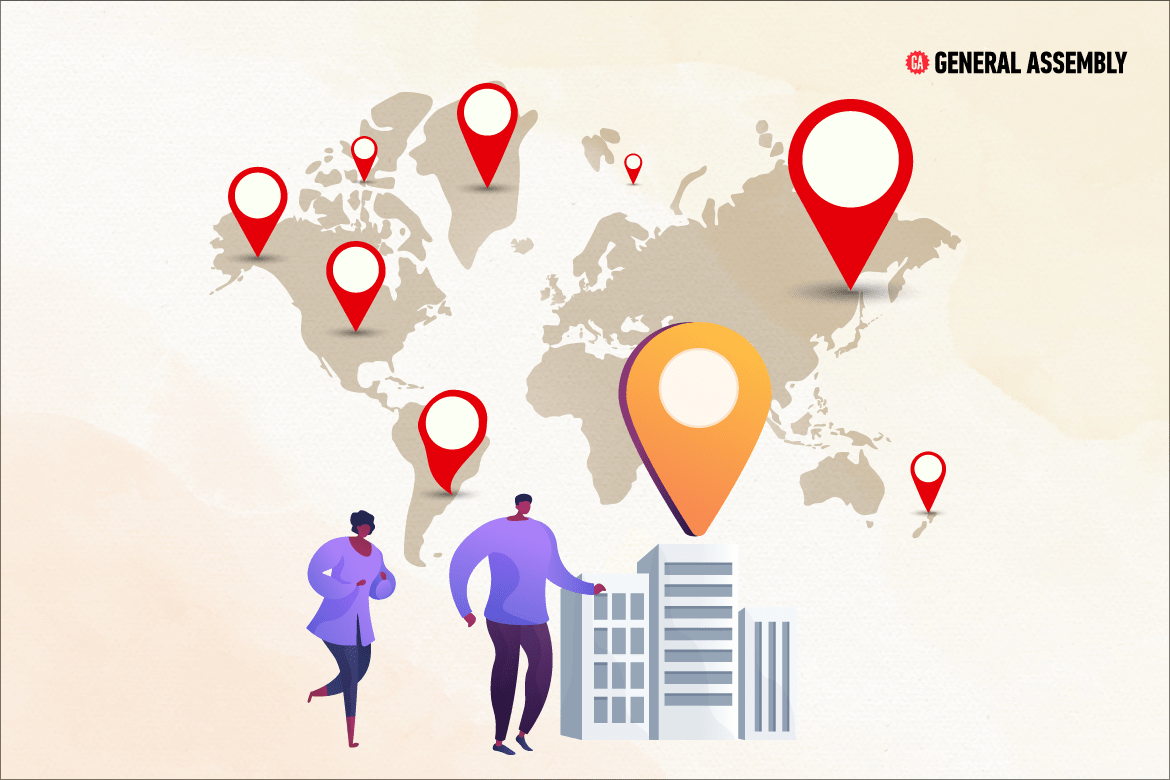 General Assembly is a coding bootcamp that teaches technical skills belonging to the various fields of study. They have campuses across the United States in many states such as San Francisco, New York City, Austin, and Seattle and other large cities like Dallas, Los Angeles, Washington D.C., Denver, Detroit, and Miami. The school has also got campuses in London, Paris, Melbourne, Sydney, and Singapore. Let’s dive into General Assembly Locations.

Though General Assembly is present in multiple locations across the globe, all classes that were conducted physically have moved to virtual online courses. Explore General Assembly’s campuses and get involved in their community at events, workshops, and courses in technology centers worldwide. Let’s see where the school has its campuses worldwide.

In the United States, the Information industry encompasses companies and institutions that engage in the production, transmission, processing, storing, and selling of information, including media companies, data processing companies, law firms, and telephone companies.

The information industry is a key pillar of the US economy and has a GDP value-added of $646 billion, equivalent to 4% of the total GDP. The sector is responsible for the employment of 2% of the total labor force in the United States, totaling about 2.7 million jobs.

Europe’s ecosystem is more distributed and more interconnected than ever – there are now 5.7m professional developers in Europe, up by 200,000 in 2017. This compares to the 4.4m in the US, a number that stayed flat year on year.

Europe’s tech (software) industry is growing 5x faster than the rest of the European economy in terms of Gross Value Added, a level that has accelerated in recent years. The European tech workforce grew 4% in 2018, a significant difference to overall EU employment growth of 1.1%.

Singapore’s thriving tech sector is the product of a range of converging factors. The city-state has a prime location at the crossroads of Asia’s biggest markets, low taxes on businesses, a well-developed IT infrastructure, strong investment opportunities, and a robust regulatory regime. Much of the credit for these strengths go to the Singapore government.

The country is best known for its fintech landscape, and the MAS (Monetary Authority of Singapore) has set aside $225 million (US$165 million) to develop the sector over the next five years.

Still, the government has also pushed to diversity the startup ecosystem. The government is particularly keen to create an artificial intelligence (AI) hub in the country by developing a dedicated data science consortium and will invest S$150 million (US$110 million) in industry research.

Check out the General Assembly Review.

Australia has 1,000+ IT providers on the software development market for now. According to ACS Australia’s Digital Pulse, the digital sector is expected to contribute about $139 billion in the Australian GDP by the end of 2020. Moreover, a 40% growth is forecasted by the end of 2023.

Australia is becoming one of the fastest-growing education and technology hubs in the Asia Pacific region. It attracts numerous engineering students and skilled and qualified engineers and developers to this country for pursuing their goals of life. Therefore, software developers in Australia became very high in demand.

Today’s review is about General Assembly Locations. Located throughout the globe, General Assembly is present predominantly in all major tech hubs. We have provided the best information available from sources available from their resources in the industry. Anyone reading this article doesn’t have to spend their precious time gathering information.