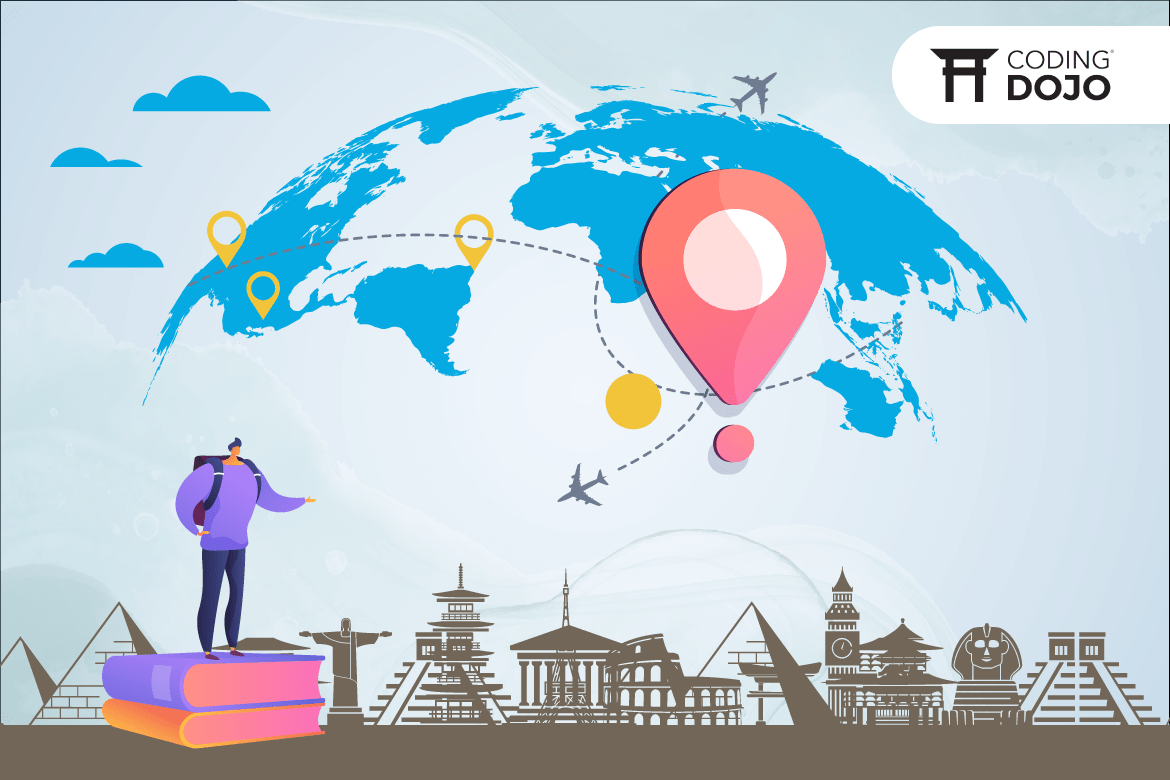 Coding Dojo is a coding school that helps its students learn technical skills necessary to land a job as a Software Engineer or a Data Scientist. The school offers a full-time onsite bootcamp, a part-time online bootcamp, and an intro to programming course for their software engineer program. Let’s discuss Coding Dojo Locations.

Due to the current pandemic situation, Coding Dojo has moved all its in-person classes to online classes. The school facilitates social distancing by reducing the number of people and interactions on their campuses.

All their programs still deliver excellent tutoring by their world-class instructional staff and fully engage with their classmates. Though the classes have shifted to online platforms, their physical locations remain active with minimum staffing. Let’s take a look at the Coding Dojo Locations below.

Located in Arlington, VA, the Coding Dojo campus offers one of the fastest career paths to becoming a developer in the nation. Situated near the nation’s capital, which is considered one of the largest hubs on the East coast, students can have access to over 1,000 tech startups and a thriving STEM job market.

Ranking near the top of the list for tech hubs, Bellevue offers an abundance of tech-related job opportunities. According to industry experts, the Seattle-Bellevue market is the second in the country for high-tech growth, and venture capitalists invested $266 million in the tech industry in the second quarter of 2014.

Major tech companies like Hewlett Packard and Micron made their humble beginnings in Boise, and the city has established itself today as a thriving tech center. In the last decade alone, Idaho has seen a 61% rise in high-tech companies. Boise is one of the fastest-growing tech hubs in the U.S., with over 8,100 developers employed but still manages to maintain its small-town charm.

Arguably the number one tech-hub of the Midwest, Coding Dojo’s Chicago unit sits in the heart of a fast-growing market for new and experienced software developers. From 2010 to 2013, Chicago’s tech-related job market grew by over 25% and ranked third in the nation. The city is also home to hundreds of prominent tech firms, such as Groupon and Salesforce, and boasts a vibrant startup scene.

In addition to its business scene, Dallas is also becoming known for its thriving tech industry. With roughly 3,000 tech companies and nearly 230,000 people employed in high­tech roles, some experts argue that the Dallas-Fort Worth region’s tech industry footprint is one of the country’s biggest. And in the middle of all this growth is Coding Dojo’s Dallas campus, a modern coding school built to train new and experienced developers.

Coding Dojo’s Los Angeles school lies in the heart of Hollywood. It trains both new and experienced developers alike. Los Angeles is home to big tech names such as Google, Facebook, Microsoft, Hulu, YouTube, and Snapchat. Economists say LA’s high-tech sector rivals Silicon Valley in providing jobs. The region is considered the second or third-largest tech hub in the world, according to various reports. The school helps students learn to program and, eventually, be part of LA’s rising tech companies.

Check out the Coding Dojo Review.

Oakland is on its way to being one of the next big up-and-coming tech hubs, boasting more than 350 startups and over $400 million in venture funding. Drawing attention from entrepreneurs in the wider Bay Area and Silicon Valley, Oakland sees growth in software development, machine learning, and innovative consumer goods.

The coding bootcamp in Oakland is Coding Dojo’s access to being part of this growing tech industry. With plenty of oceanfront property and little congestion, Coding Dojo Oakland is ideal for students to learn software development or upgrade for skills to become a web programmer.

This Coding Dojo campus is situated between Los Angeles and San Diego. Orange County has become a leading location for career growth in the technology industry due to its uniquely diverse high-tech companies. With $1 billion net worth of funding from venture capital in 2015, the area is home to heavy-hitters in gaming, information technology, life science technology, sports technology, and clean technology.

With many of the world’s largest tech companies and thousands of startups, San Jose provides a rich learning environment and job market unlike any other. Coding Dojo San Jose sits in the heart of Silicon Valley, where the highest concentration of high-tech workers of any US metropolitan area prevails.

Despite its small footprint, Tulsa is one of the top markets for skilled tech workers in the region. It’s a unique opportunity for anyone looking to get into tech, where the demand for tech talent greatly exceeds the local supply. To fill this shortage, Coding Dojo is partnering with the George Kaiser Family Foundation to open Tulsa’s first coding bootcamp. Together, the school aims to raise the next generation of software engineers from this city.

Today’s review is about Coding Dojo Locations. We have provided the best information available from sources available from their resources in the industry. Anyone reading this article doesn’t have to spend their precious time gathering information.